The chalkstreams: how bad is it?

Posted on March 6, 2014 by lifeofachalkstream 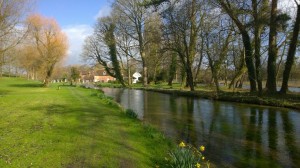 Well, actually surprisingly good. This week I have done a tour of the Itchen, Test, Avon and Dorset stream catchments. I have definitely seen rivers this full and water meadows this flooded twice before in the past two decades but the real difference is how long the water is laying and the carnage to the trees.

I really cannot believe how many trees are down; not just spindly ones but huge trees and especially poplars. There is a section down on the Allen that looks positively lunar with the huge craters alongside tree trunks that all lay in exactly the same direction clearly felled by a vicious spike of wind that blew through. Poplars were a bit of a cash crop in the 1960’s and 70’s planted and harvested for matchstick production, but when that stopped they were just left to grow and are now vulnerable being well past maturity. Fortunately these particular trees have fallen away from the river, but elsewhere we are having real problems with trees. Usually with the help of farm machinery we can get out even the biggest trees but our difficulty at the moment is that no tractor can get near the river without getting stuck. So, it is with winches, grim determination and heavy duty waders plus a good dose of ingenuity that the keepers are gradually clearing the rivers. Firewood anyone?

On a more positive note you will see from the photos that generally the rivers are back within their banks and what has struck me is how clear the water is, albeit pounding through at many times the normal rate. Even on the upper reaches where you’d normal wade nonchalantly you need to think twice before getting in. As for the fish well they don’t care; after the winter spawning they are very active and far more visible than in a normal year. The mild weather is encouraging the reeds and plants along the margins to shoot early and there have been staggering hatches of olives. On the Wylye I had to swat away clouds that were almost choking me.

So, what’s the verdict? Well, as far as the fish and the ecology of the chalkstreams everything is as it should be – this is how the water meadow system was designed to cope. But as for us anglers things are trickier. The real problem at the moment, and I suspect until into early April, is getting along or to the banks. All are waterlogged to some degree, with plenty of places were the water is still Wellington boot deep . With every day the worst is receding and I expect everywhere to open on schedule as planned, but if you are venturing out wear waders (even for bank fishing) and take a long handled net. If it is a wading beat go carefully especially getting in and out as it is often hard to tell where the bank ends and the river starts.

I know it is tempting to look on the bleak side of the floods, but it is worth casting our minds back two years this week to when I attended a crisis drought summit in Berkshire. The media had been filled with TV reporters standing in the dried up River Kennet at Hungerford and we were told that it ‘would take generations’ for the flows to return. Mother Nature always, but always has the last laugh.

I am a professional fly fisherman, fishing guide and author living in a restored water mill in Hampshire. I write a bi-weekly blog charting the oddities and events that come my way living life on a river. In 2014 Harper Collins published my first book Life of a Chalkstream and in 2017 the next will be out, this time about the otters who share my life at the mill.
View all posts by lifeofachalkstream →
This entry was posted in Uncategorized. Bookmark the permalink.

2 Responses to The chalkstreams: how bad is it?